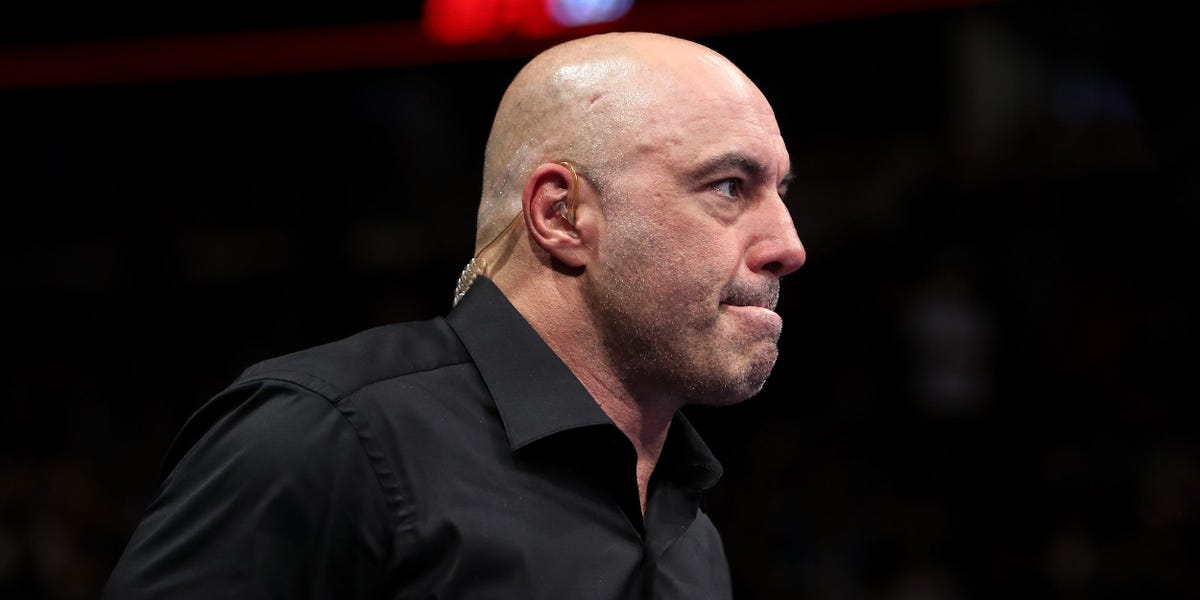 This spring Joe Rogan struck that special kind of nerve that sets the internet on fire. Midway through a three-hour episode of his wildly popular podcast, “The Joe Rogan Experience,” he said that young, healthy people didn’t need the COVID-19 vaccine.

“If you’re, like, 21 years old and you say to me, ‘Should I get vaccinated?’ I’ll go ‘no,'” Rogan said. “If you’re a healthy person, and you’re exercising all the time, and you’re young and you’re eating well, I don’t think you need to worry about this.”

“You’ve got to be careful about what comes out of your mouth,” Prince Harry scolded Rogan on the “Armchair Expert” podcast. During an episode of his show, John Oliver announced that viewers “stop listening to what Joe Rogan tells you, he’s a ‘fucking moron’ — and those are his words, not mine.” Even the White House warned Americans to ignore the podcast host.

“I’m not sure that taking scientific and medical advice from Joe Rogan is perhaps the most productive way for people to get their information,” White House communications director Kate Bedingfield told CNN.

Rogan, who has a $100 million licensing deal with Spotify, is one of the most powerful figures in media, and one of the most controversial. On his show, he’s aired COVID-19 misinformation, laughed as a guest described sexual harassment, and hosted a prolific conspiracy theorist three times. His supporters praise his candor and open-mindedness; his critics say he fuels conspiracy theories and intolerance.

Spotify, which owns the exclusive rights to stream “The Joe Rogan Experience,” has stood by him, despite removing a few dozen episodes from his archive. After his vaccine comments, the company didn’t ask Rogan to reconsider his stance, Axios reported, and while Spotify has removed anti-vaccine content, it determined Rogan’s comments weren’t forceful enough to warrant action, The Verge said.

But some of the company’s employees have been irritated by Spotify’s largely hands-off approach and have pushed leadership to rein Rogan in. Spotify hasn’t budged.

“We want creators to create,” Spotify’s CEO, Daniel Ek, told The Financial Times in October in response to a question about Rogan. “We’re not looking to play a role in what they should say.”

Rogan began his career as a stand-up comedian in the late 1980s. By 1994 he was an actor, and in the next decade he would become an announcer for the UFC and the host of the reality show “Fear Factor.”

At the end of 2009, he started “The Joe Rogan Experience” with Brian Redban, who produced videos for his website. Though Rogan liked the idea of hosting a radio show, he didn’t have any grand ambitions for the podcast. The show was unpolished at first, but, within a year, it cracked the top 100 podcast list on iTunes. Over the next decade it would take Rogan’s fame to new heights.

Rogan carries himself with none of the pretension of a Hollywood star. He has an open, down-to-earth demeanor, a “regular guy-ness” that Dean Valentine, the Disney executive who signed Rogan to his first television deal, told Insider.

Rogan has a unique ability to make his guests feel comfortable during marathon conversations.

“He kind of uses his mental jiu-jitsu to get you to say things you might not have wanted to say, but then he kind of cradles you as you hit the ground,” said Christopher Ryan, an author who has appeared on “The Joe Rogan Experience” 14 times. Ryan once told Rogan about his first sexual experience, a memory he later wished he hadn’t made public.

Rogan’s formula has worked. “The Joe Rogan Experience” received more listeners than any other podcast in 2020. When Elon Musk gives an interview, he’s more likely to talk to Rogan than The New York Times, and, Rogan has said, Joe Biden, Pete Buttigieg, and Elizabeth Warren asked to appear on the podcast during the last presidential election (he said he turned them down).

But some feel Rogan’s show can at times be a megaphone for disinformation, misogyny, and bigotry, as in interviews with Proud Boys founder Gavin McInnes, white nationalist Stefan Molyneux, and alt-right provocateur Milo Yiannopoulos. When Yiannopoulos came on the show in 2015, he told Rogan, “I don’t like the idea of Black people as homosexuals.” (Rogan responded, “You got some fucking issues.”) During a 2011 episode of “The Joe Rogan Experience,” Rogan laughed and clapped when his guest, the comedian Joey Diaz, said he had demanded oral sex from 20 women who wanted help getting onstage at a comedy club in Hollywood.

Spotify, which declined Insider’s request for comment on this story, has benefited from Rogan’s unfiltered style. The company’s stock price jumped 8% on May 19, 2020, the day the company announced the Rogan deal, and “The Joe Rogan Experience” was, as of this month, its most popular podcast in the US. In a letter to shareholders summarizing its 2020 performance, the company said the show attracted new users and contributed to the growth of its podcast ad revenue.

Rogan has created tension within Spotify

But not everyone at Spotify is a fan. One former employee told Insider the Rogan deal was the most divisive decision the company made during his tenure. Last fall, in an internal channel for Spotify employees on the professional networking app Fishbowl, one employee wrote, “I’m personally bothered by his transphobic comments and am concerned with the way he might spread misinformation,” according to a photo of the post viewed by Insider. Another stood up for Rogan saying it’s just “a loud minority of people who are outraged.”

Spotify has had numerous discussions with employees concerned about Rogan and his show’s content. At a town-hall-style meeting in September, one employee said many of their LGBTQ colleagues felt “unwelcome and alienated” after talking with management about Rogan. Some Spotify employees asked for the ability to include trigger warnings or fact-checks on “Joe Rogan Experience” episodes before they went live, or to delete them entirely, but the company declined their request.

According to The Wall Street Journal, Rogan’s critics within Spotify were particularly bothered by his decision to invite the author Abigail Shrier on his show in July 2020. Shrier’s book “Irreversible Damage,” about the increasing number of young women changing their gender identity, has been accused of being anti-transgender, and Amazon banned its publisher from running ads for the book on its site. (Shrier has said she supports the right of adults to transition but is concerned about the ease with which teenagers can get access to irreversible treatments they might regret later.) During her interview with Rogan, she praised him for creating a rare forum where people can have “normal conversations.” Rogan said later in the episode, “I gravitate toward things people shy away from.”

Spotify has mostly let Rogan do what he wants, but when the company brought Rogan’s archive on to its service, it removed some controversial episodes, including those with Yiannopoulos, McInnes, and the conspiracy theorist Alex Jones. Rogan, who didn’t respond to Insider’s requests for comment, has said he didn’t mind the minor edits to his back catalog. But he went ahead and hosted Jones, whom the Southern Poverty Law Center has called “the most prolific conspiracy theorist in contemporary America,” for a third time, in October, possibly as a test of whether Spotify was serious about letting him have creative freedom.

Some Spotify employees flagged parts of the episode to the company’s internal-review team, including claims Jones made that masks were ineffective in limiting the spread of COVID-19 and that some recipients of the polio vaccine became sick from the injection, The Wall Street Journal reported. Spotify left the episode up unedited.

As the reach of “The Joe Rogan Experience” has grown, Rogan has kept outside voices from creeping in. Only three other people work on the show, Rogan said in 2019. In the studio, Christopher Ryan and Matthew Yglesias — an author and journalist who appeared on the show last year — said it’s just Rogan, his guest, and Jamie Vernon, the show’s producer. Ari Shaffir, a friend of Rogan’s, told Insider that Rogan won’t take more than $5,000 per advertisement, to avoid being in a position where companies try to dictate what he says, and he won’t accept ads for products he doesn’t want to promote (he once turned down a

dog-food
ad because he wouldn’t have fed the product to his pet).

Despite his massive audience, at least one company has decided supporting Rogan isn’t good for business. After Rogan’s most recent interview with Jones, a DoorDash spokesperson told Insider the delivery service had stopped advertising on the show months earlier: “We condemn the sentiments and divisive language then expressed by Joe Rogan.”

Rogan has held his ground when attacked. He defended himself after his claim that young, healthy people didn’t need a COVID-19 vaccine blew up, saying he was broadly pro-vaccine and noting he had recommended on the April 23 episode that many people get vaccinated. But he didn’t retract his opinion that some people could go without an injection and seemed puzzled that his off-hand remark was received with such gravity. “I’m not a doctor — I’m a fucking moron,” he said on his podcast. “I’m not a respected source of information.”

Rogan’s apparent disdain for his critics fits into a larger frustration with what he sees as an overly sensitive and censorious group of left-wing activists trying to silence those with opposing views, rather than debate them. On an October episode of the “Breaking Bread With Tom Papa” podcast, he called his detractors within Spotify “woke kids” who wanted to suppress any ideas they disliked. In a 2020 New York Times interview, he said “anything that wants to limit discussion is dangerous to the evolution of ideas.”

Whatever advertisers or Spotify’s rank and file think of him, Rogan appears to have an ally more powerful than any of them.

“The guy who runs Spotify, the CEO, is amazing,” Rogan said of Ek during his 2020 interview with Tom Papa. “He’s a fan of the podcast, and he likes it wild.”