All About Molly McNearney & Their Kids 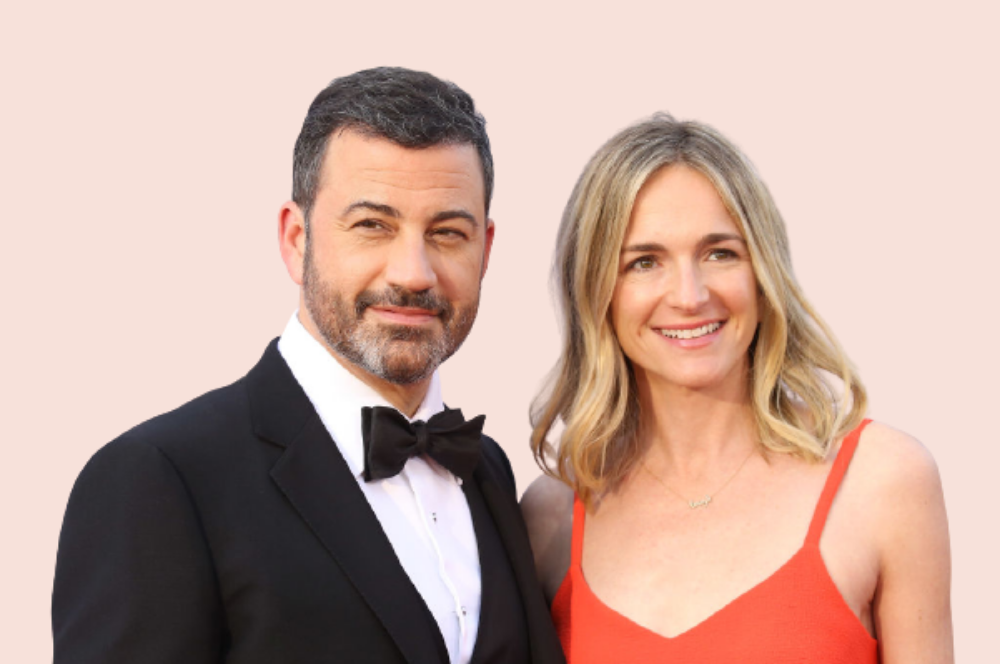 As one of the most popular figures in late-night TV, Jimmy Kimmel is a bonafide star. And it turns out that a special someone who worked behind the scenes to get him to that point is also the woman’s now his wife: Jimmy Kimmel Live! co-head writer, Molly McNearney.

Curious how this coworker scenario turned into the stuff of lifelong romance? Let’s get to know Jimmy Kimmel’s other half, Molly McNearney—and put to rest those rumors about how he almost married Gabourey Sidibe.

Who is Jimmy Kimmel’s wife?

The 43-year-old McNearney is an Emmy-nominated writer and producer and the co-head writer on Jimmy Kimmel Live! She’s been with the show since its inception in 2003, when she started as a writer’s assistant. She’s also written for the Oscars, the Emmys and the White House Correspondents’ Dinner when Kimmel has hosted those events.

Is Jimmy Kimmel’s wife an actress?

McNearney has dabbled in acting, appearing in such films as Fun Mom Dinner and the Jennifer Aniston film Dumplin’, where she played a former teen pageant queen named Delia Shepherd. Speaking of Aniston, she and McNearney have long been super-close; as McNearney revealed in 2018 when she interviewed her Friends-starring friend for InStyle, “I met Jen (don’t roll your eyes at me — that’s what we call her) in my kitchen about six years ago when my husband, Jimmy [Kimmel], and I invited our friend Justin [Theroux] over for pizza with his new girlfriend.”

McNearney is also a big-time member of Bachelor Nation; she’s been right eight of the last 10 seasons in guessing the contestant each Bachelor or Bachelorette will ultimately choose. How does she do it? “I don’t think there is a process, she just kinda looks at ‘em,” Kimmel once told former Bachelor star Matt James. “Sometimes she picks before the show starts, and she looks at a picture and decides—and somehow she gets it right,” he  (FYI: McNearney thinks Greg Grippo will win Katie Thurston’s heart this season!)

Related: So, Did Bachelor Star Matt James Even Propose to Anyone?

How did Jimmy Kimmel meet his wife Molly McNearney?

After McNearney was newly hired as a Jimmy Kimmel Live! writer’s assistant, an executive producer introduced her to the show’s host—and he insulted her right away. When it came up in conversation that she competed in triathlons, Kimmel said, “That is really stupid! What a waste of time.” As McNearney remembered in 2014. “That was the first and only thing he probably said to me the entire first year of working there.”

Kimmel had a lot of work to do when he decided he wanted to date McNearney, because she apparently wasn’t pining for him. “I never once thought of him that way,” McNearney told Glamour. “That’s Workplace 101. You don’t date your boss.”

So how did he win her over? By cooking her dinner—actually, five of her favorite dinners, all in one night! During a writer’s meeting, he casually asked everyone about their favorite foods and later invited her over to his place. “I walked in, and there was a pizza, a BLT, crab claws, a cheeseburger and gnocchi,” she recalled. “He had made them all from scratch. I couldn’t believe it, and I realized how incredibly thoughtful and generous he really was.”

When did Jimmy Kimmel and Molly McNearney get married?

Kimmel and McNearney tied the knot in July 2013 in Ojai, California. Matt Damon was there, despite his ongoing “feud” with Kimmel. So was Aniston, Ellen Degeneres and wife Portia de Rossi, John Krasinski and wife Emily Blunt, plus plenty of other celebs. It was a beautiful, peaceful day… except for one thing: McNearney pranked Kimmel!

Related: Move Over, Jim and Pam! Emily Blunt and John Krasinski Are the Definition of Couple Goals

When it was time for the bride to head down the aisle, the person who actually appeared and started walking toward Kimmel was Sidibe. Not even the couple’s families had been told about the stunt McNearney had planned with the Precious actress, so everyone was truly confused. Sidibe, meanwhile, was a little terrified, telling Elle in 2016. “I thought someone was going to jump me, I was so afraid that someone was going to run and attack me like ‘No! Molly’s day!’”

Do Jimmy Kimmel and Molly McNearney have children?

Kimmel and McNearney share two little ones: Jane, who is 7 years old, and William (called Billy) who is 4. Both of them are periodically featured on their dad’s show, even though neither of them think Kimmel is that funny. “I keep telling them I’m this big, funny TV star, and they don’t seem to care,” he told Closer Weekly in 2019.

In 2017, Billy made national headlines just days after his birth when Kimmel discussed his son’s heart condition on the air, describing how it felt to discover that his newborn son had a heart defect that required almost immediate surgery. Kimmel also took the opportunity to lobby for more universal healthcare in America. “If your baby is going to die and it doesn’t have to, it shouldn’t matter how much money you make,” he said on air, before imploring everyone to get past politics and “take care of each other.”

McNearney was supportive of her husband in that moment. “He couldn’t sit quiet, and I’m so glad he didn’t,” she later told The Hollywood Reporter. “He had 14 writers sitting in a room ready to write, and he said, ‘I got this,’ and went into his own office and closed the door. That was all him, all his heart.”

Kimmel also has two older children from a previous marriage. Katie Kimmel, 29, is an artist and designer; her dad once accused a retailer of ripping off her designs. Kevin Kimmel, 27, works in entertainment, having written and directed for Funny or Die. He’s also worked on such shows as Survivor, Big Brother and Tosh.0, according to IMDb.

Is there any stepmom drama? Not so far. “I text his daughter daily, and she’s one of my favorite people,” McNearney has said. “His son is such a sweetheart, and I am just so lucky for them.”

Who was Jimmy Kimmel’s first wife?

Kimmel was previously married to his teenage sweetheart. Gina Maddy, the mother of his two older children, was his first girlfriend and his first spouse. Maddy and Kimmel met when both attended Arizona State University. They married in 1988, when he was only 20 years old, and stayed together until separating in 2002. The divorce wasn’t finalized until 2003, the year Kimmel started Jimmy Kimmel Live!

Who did Jimmy Kimmel date before Molly McNearney?

Between his two marriages, Kimmel was in a long-term relationship with fellow comedian Sarah Silverman. Many people thought that Kimmel and Silverman could be headed down the aisle, but they broke up for good in 2009 after five years together.

They still get along; Kimmel spoke at her Hollywood Walk of Fame ceremony and they’ve often poked fun at their former relationship on his show. “I’m waiting for this tryst with you [and Molly] to be over!” Silverman joked on a 2018 episode of Jimmy Kimmel Live! “I mean, OK, Molly’s cute. She’s bright, she’s funny, she’s blonde, whatever, but come on! It’s not fair! She gets new, woke Jimmy, I had Man Show Jimmy.”

Does Jimmy Kimmel’s wife appear on his show?

Yes! Molly not only works on Jimmy Kimmel Live!, but she does appear on camera from time to time as well. In February 2021, she decided Kimmel had too much stuff at home and hosted a game of “Win Jimmy’s Crap” with people on the street.

The key to their relationship is likely a strong and healthy sense of humor.  Kimmel and McNearney are witty and hilarious–they know how to dish it out and can take it too, even during trying times. “I’ve fully trained our 5 and 3-year-old to say “Daddy did it” EVERY time they fart so yeah, I’d consider this time to be ‘productive,’” McNearney tweeted in April 2020 when COVID-19 forced everyone into quarantine.

I’ve fully trained our 5 and 3 year old to say “Daddy did it” EVERY time they fart so yeah, I’d consider this time to be “productive.”

When McNearney once had an emergency landing in a plane, she texted “Jimmy, I love you and I love Jane, and you’ve always been an incredible husband.” Kimmel’s crack response? ”I just signed up for Tinder but I PROMISE not to activate it until we know what’s what.” He texted her a shirtless “profile pic” too.

Still, it’s clear that after everything they’ve been through, the love runs deep. They talk about each other often on the air and on social media, and they seem to still get a kick out of each other, even after so many years of marriage. For example, in March 2020, McNearney tweeted. “My husband just quickly pulled over for an ambulance and cursed at the cars that didn’t and that’s exactly why our marriage is still hot.”

My husband just quickly pulled over for an ambulance and cursed at the cars that didn’t and that’s exactly why our marriage is still hot.

Next, find out why some fans think Anne Hathaway married William Shakespeare reincarnated!