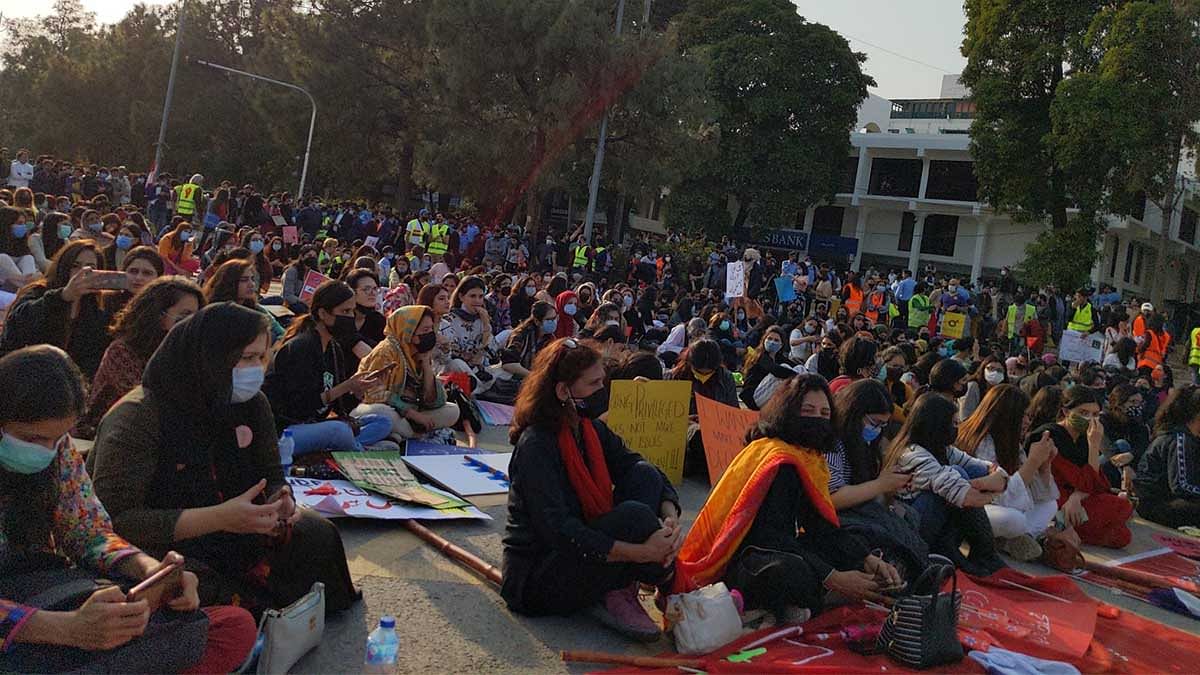 
New Delhi: “Is this the punishment for being one of Pakistan’s daughters? I did not go there in any lewd clothes nor have I ever filmed lewd TikTok videos. I was in a proper dress.” This is what the Pakistani woman who was molested by a mob of 400 men at Minar-e-Pakistan in Lahore told Daily Pakistan Wednesday, crying during the interview.

According to the FIR as reported in Dawn, the woman said that a security guard at the Greater Iqbal Park let her into the Minar-e-Pakistan enclosure as a means of escape but the mob overpowered the entrances and began sexually assaulting her, tearing off her clothes.

The men filmed their acts. Pakistanis on social media erupted in anger over the blatant abuse. One user said he is unable to console his sister; others hit out at the misogynistic, patriarchal mindsets and those who often use the #NotAllMen hashtag.

But please tell me more about how womxn should ‘smile more’#minarepakistan pic.twitter.com/QraQXGOO59

Countless men groped her. Hundreds did nothing to stop it. Still, Not All Men is outperforming almost every other hashtag.
If there were enough ‘other men’, this wouldn’t have gone on and on and on. This video proves that other men are- at best- a rounding error. Get over it.

Lahore Police had on Tuesday filed an FIR against hundreds of unidentified men for sexually assaulting and stealing from the woman who was filming a TikTok video at the city’s Greater Iqbal Park and Minar-e-Pakistan on the country’s Independence Day, Dawn reported.

While the incident took place on 14 August, a video of the woman being surrounded, attacked and groped by hundreds of men began circulating on social media Tuesday under the hashtag #MinarePakistan, as Pakistanis expressed their shock and anger, joined by some Indians.

While Major Surendra Poonia said that the male-dominated mob of “vultures” in the video is “no less than the Taliban”, a Pakistani columnist Husn.E.Qudrat wrote “Yes All men”.

Shocking beyond imagination!
400 men groping,beating & tearing cloth of 1 tiktoker girl in #MinarePakistan
Girl screaming for help.. Azaan going on in the background
These Vultures are no less than Talibanis
This is Naya Pakistan..Shameful pic.twitter.com/PBYWqAWvon

Although Lahore Police is reportedly tracing the hundreds of men involved in the groping and assault, they have also faced criticism for failing to respond in a timely manner, in matters of crimes against women.

Despite “Ashura” duties, Police is analyzing the video clips and available CCTV footages to identify the culprits & arrest them.

Strong and non-bailable clauses are added in the FIR.

Chief Minister has ordered to arrest all the culprits ASAP

“I saw that girl’s interview where she said her team made several calls to 15 for help but they didn’t respond. Hold police accountable for their criminal negligence as well,” Beenish Zaman tweeted.

I saw that girl’s interview where she said her team made several calls to 15 for help but they didn’t respond. Hold police accountable for their criminal negligence as well .

Others criticised journalist Azhar Meshwani’s remarks that the police were taking action on the groping incident “despite ‘Ashura’ duties”.

Azhar bhai, what about Police in that area? Why they are not responsible? Ashura can never be an excuse that security was reduced on Minar e Pakistan. This is police failure, this relevant commissioner’s failure. Why protecting them? No excuses police is answerable!!!

What does ‘despite ashura duties’ mean? Does the protection of one minority mean that women should be grateful they get a little fraction of justice? The police owe it to us to serve us whenever needed, I’m sure there’s enough police 2 ensure that both women and Shia feel safe.

The outrage and public pressure led to multiple Pakistani politicians finally speaking out on the incident Wednesday.

Given the belated nature of these politicians’ and police responses, four days since the incident took place, Pakistani users have not lost sight of the stark reminder that a woman’s freedom to dress and shoot videos was swiftly taken away from her on the country’s Independence Day.

Why news media is in crisis & How you can fix it

But the news media is in a crisis of its own. There have been brutal layoffs and pay-cuts. The best of journalism is shrinking, yielding to crude prime-time spectacle.

ThePrint has the finest young reporters, columnists and editors working for it. Sustaining journalism of this quality needs smart and thinking people like you to pay for it. Whether you live in India or overseas, you can do it here.